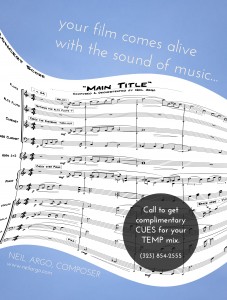 Films come alive with the sound of music.

Neil Argo works closely with directors & producers to create musical scores for motion pictures and television. To showcase his talent, the campaign employs a “hook” associating the Sound of Argo with the Sound of Music. Catch the riff.

This is the premiering print facet of the campaign “Sound of Music” promoting the talent of Neil Argo as composer for film and TV. Along with the print effort is a video series that exemplifies the power of a score by Neil Argo. For more detail about the campaign, visit the project particulars.